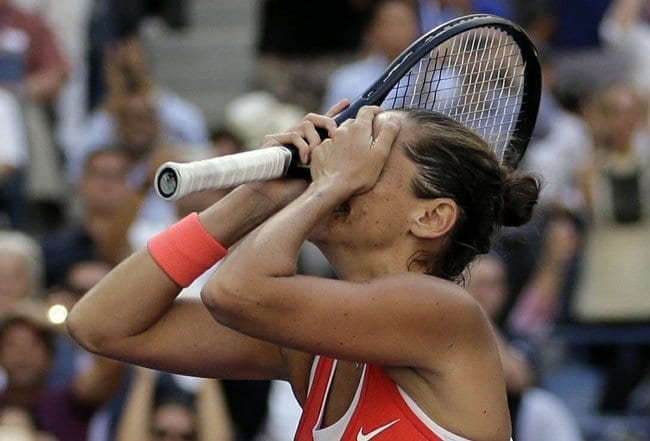 A Career Development Tip From A Recent Sports Lesson

Tennis Pro, Roberta Vinci beat Serena Williams at the 2015 US Open Semifinal in a stunning defeat. At the time, Everyone underestimated the unseeded Vinci. When Vinci won, she declared: “But today is my day – sorry guys.”

Why offer an apology?

What a monumental feat! Termed “aging” by the press, Vinci beat Williams in 3 sets. Previously, Vinci had never won against Williams, one of the best tennis players of all time. After winning, exactly what Vinci set out to do, she needn’t have offered an apology.

The match was in New York, and attended primarily by US fans. One could imagine that most fans were rooting for their fellow American Williams, not the Italian Vinci. A Williams victory would generate enormous buzz; but now the excitement will shift. With this apology, Vinci defused fan disappointment – is that her responsibility?

Does Vinci not deserve this win because:

Or is apologizing simply a female habit? Women have historically been collaborators, moving families and other teams ahead by praising and empowering them, smoothing ruffled feathers in times of conflict to keep emotions and tears in check.

As an example, I joined a Mommy and Me group when my children were young.  One of my fellow moms was rear-ended, with the other driver clearly at fault. When she stepped out of the car, she could tell the other driver was emotionally charged, so she apologized to diffuse the situation. The other driver’s insurance firm used her apology to argue that she was at fault. She fought the case, which ultimately resulted in a series of “I’m Sorry” laws, which stipulate that an apology is not an admission of guilt.

Don’t Give Away Your Power

Many times an apology works and matters. However, too often women give away their power.

Roberta Vinci: You EARNED your day – Claim it!

Our Connect•Work•Thrive Return-to-Work Career Transformation Conferences empower workers seeking to change careers or return to the workforce after a career break by addressing these habits and other issues. We offer career transition coaching with our career consultants, interactive workshops, dynamic keynote speakers, individual coaching sessions with our career advisors, career development planning, headshot photography, lunch, and networking opportunities with career and industry experts, fellow job seekers, and employers. Join us!

To learn more about how we can help you in your career journey, schedule a complimentary consult with us today!